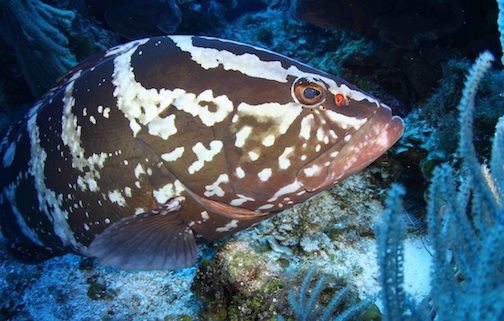 Above: the Nassau Grouper

New hope may be emerging for the endangered Nassau Grouper, following a 10-year effort to protect spawning so-called “aggregation sites” for the fish.

A growing and healthy population of Nassau Grouper now exists on the reefs near Little Cayman, giving scientists optimism that the species’ local recovery could spread through the Caribbean.

In February, researchers examining the Little Cayman area found a “marked increase” in the number of groupers based on a sampling of eggs.

“It was the biggest spawn we’ve ever seen,” Harvey said. “With the right cooperation, the Nassau Grouper will become a symbol of conservation for threatened marine species, a shining example of what can be achieved if all the stakeholders work together.”

Currently, the penalty for catching Nassau Grouper in an aggregation site between November and March is up to one year in prison or up to $500,000 in fines.

“I think we will find in the years to come, as we monitor these populations, we’re going to see a dramatic response in terms of the number of new fish on the reefs for divers to see and fishermen to catch,” said Dr Brice Semmens, who, along with his wife, Christy, has led research efforts by the Reef Environmental Education Foundation.