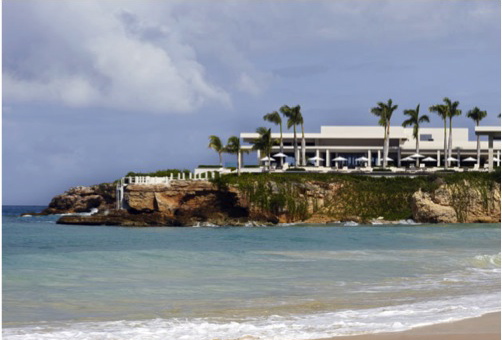 Above: the Viceroy Anguilla

While Anguilla saw a wave of luxury resort development during the economic boom in the middle of the decade, like the rest of the Caribbean it was hurt by the economic downturn. Some positive signs exist, however, including the early success of the Viceroy hotel in Anguilla, the island’s first major branded resort. Attorney Keithley Lake is a senior partner and the founder of law firm Keithley Lake and Associates in Anguilla and the president of the Anguilla Chamber of Commerce. Caribbean Journal talked to Lake about the Anguillan economy, the tourism sector and Anguilla’s interaction with the rest of the region.

How would you describe the current state of Anguilla’s economy?

Well, the economy is certainly not robust at this time, because some of our main sectors — our main sector is tourism — haven’t really recovered, even though we’re seeing encouraging signs. They haven’t seen any real recovery from the high points of 2009. So we still have a lot of developments that have either been stopped or are in different phases of being revived, so that has further impact — because construction and tourism go hand in hand. And because the tourism sector is not performing as a couple of years ago, our construction sector is virtually at a standstill, so there’s much room for improvement.

What positive signs are you seeing in tourism?

Well, tourism is beginning to emerge as a leader once again. We’ve had the Viceroy Hotel, the largest hotel in Anguilla, and it is really the first branded hotel we have in Anguilla, so we’re seeing the effects of a hotel that has a worldwide reservation system, and the projections are that they will have a very good year. They have a staff of 800 people, so that has a substantial impact on the economy going forward. Plus, they also are going to be engaged in the sales of condominiums and beachfront villas, to further add to the economic activity.

What kinds of projects is the Chamber working on right now?

Well, the Chamber has been working closely with the government, and the fact is that there is an ongoing debate now as to what should be done. Because of the economic downturn, there was a large budget deficit, and the question was, how do you address that fact. The government has approved a whole series of taxing measures, and we in the chamber always have taken the position that while maybe some tax measures are necessary, there should be an equal concern about investing in the economy — for instance, in tourism. The tourism budgets should reflect ongoing investment. So those discussions are ongoing. We’re also looking to make it easier to do business. A lot of our members are concerned about the customs process, they’re concerned about how long it takes to get certain government approval done, so this is a whole range of issues that we are working closely with the government on to make it easier for businesspeople to do business – to sell goods and services.

Are there any sectors which could be doing better or are slated to improve?

In addition to tourism, we have two main sectors of our economy — which is the construction side, and the financial services side. Our financial services sector is promising but we are still not seeing the growth that it should have, and there are a number of organizations such as the Anguilla Financial Services Commission, which are looking at addressing some of the needs of that sector, which are new and revised legislation as well as expanding into new areas such as aircraft registration, having a bigger ship registry and those kinds of things. But legislation will be necessary, and a lot of people are working very hard to make that happen. There’s one other project on the island [the Temenos] that went bankrupt, and we are now working with the government to make sure that when it does resume, it comes with a commitment from the new developers to rapidly move into completing the project, which would create a substantial amount of construction work. We are supporting the government and its objective to make sure that it happens. So with the growth in tourism, and if we can jumpstart our financial services industry, and our construction industry, I think we could see modest improvement in the economic outlook on the island.

How much does Anguilla interact with the rest of the Caribbean, and how much more can it do in that regard?

The Anguillan economy is basically linked to the US and, increasingly, to Asia, because we have a lot of merchants who are doing direct business out of Asia. But I think that more economic integration throughout the Caribbean would serve to help a lot of things. Just last week, the Chamber had a function and we were pleased that some individuals were there from Trinidad who were bringing business opportunities to Anguilla, and trying to expand their franchises in Anguilla. We applauded that. I think sometimes we look too far for a solution, and the answers are right at our doorstep. And that’s going to take a concerted effort, beginning with the Chambers of Commerce of the different islands, and making a commitment to making these things happen. Because the level of our Caribbean trade is basically limited to — we do a lot of cement out of Trinidad, some steel products out of Trinidad, but apart from that it’s just the local fruit vendors who come and go every week. We ought to be doing better than that. Because as I travel across the region, I become increasingly aware of good opportunities — not only within the Caribbean but say, Guyana and that mix. We should be importing far more lumber and wood products out of Guyana than we do now. Instead, we bring them out of Miami and elsewhere. But it’s still an untapped area as far as we’re concerned.